End of the road?

Oh my.  That was a heartbreaker (backbreaker, too?).  And, quite frankly, I don’t wish to talk about it.  It’s just so tragic.

I mean, I really thought this was the year.  I really did.  I thought that maybe we’d finally be back in the playoffs where we belong.  And now…I’m not so sure about that.  Now, we might be that team.  You know…the one that finishes in ninth place, only like one point shy of a playoff spot.  Yeah.

And I’m sorry for being so pessimistic, but that loss was a really horrible one.  As soon as Selanne tied it up, I felt the tears come, but I calmed down, telling myself they’d still get the two points.  But then, fucking Cam Fowler scored, causing me to burst into tears.

Now, a lot of fans are up in arms.  Some are even threatening to abandon the Stars for this terrible-ness. And me?  Well, I’m physically incapable of leaving them.  I love them too much to ever break up with them.  I mean, I’ll threaten a breakup, but I never actually go through with it.

Anyway…that wasn’t a fun one.  Let’s hope they can redeem themselves tonight.

“Carry on my wayward son.”

Simply saying “We needed that” is an understatement.  At this stage of the game, two points are more like five.  Figuratively, of course.

Lately, the Stars have been in a bit of a funk, and maybe they still are.  I think after the Kings game, I said this funk was due to a severe case of “lack of Adam Burish.”  Burr didn’t play against San Jose either and Bingo: loss.  The funny thing, as Razor Reaugh brought up in one of his blog posts this week, is that the only team the Stars can beat without Adam Burish is the team that Adam Burish used to play for.  Ironic, isn’t it?

Anyway, I thought the stars played a great game.  Or, I don’t know, maybe it just looked that way compared to the lifeless Hawks.  Toews and Co. looked like they had given up after being hit a couple of times.  They were all, “No way.  We’re not hitting you like that.  No, we’re saving it for Phoenix.  You guys can have this game.”  It was sad how quickly they threw in the towel.  The Stars were the better team throughout.  We hit harder, we skated faster, and we played to win.

Beating the champs, who we leap-frogged with that win by a complicated tiebreaker, proves that we can still do this, that our early season success wasn’t a fluke.  I don’t totally have faith that they can do this, but I have a lot of hope that they can.  If that makes sense.  They’ve kind of gone wayward at times, but they’re still my team, hence the title of this post.

How about that Jamie Benn, eh?  I mean, really.  The kid is a monster.  Like, if James Neal was the Real Deal, I guess the Bennster is the Real Real Deal.  JB is so dominant on defensive plays.  He may not have scored this time, but he did something he’s really good at: stealing pucks for others.  It led to a goal, you know.

Speaking of the Bennster, I thought it was pretty classless of Duncan Keith to go in and hit him like that.  Steve Ott thought so, too, so he went in and started punching Keith, who got a penalty for the play.   It’s good to see them all stand up for each other, because sometimes it feels like they don’t.

Steve Ott had a hell of a game.  Was it just me, or was that guy everywhere?  Otter scored the game-winner on a breakaway from a perfect pass from Brad Richards and hammered the Hawks the rest of the night, doing that in-your0face thing he does so well.

Next up: tonight against the (gulp!) Flyers

I don’t even want to talk about that one.  But, hey, is anyone really surprised?  We were playing the Kings, and that sort of horrific event only happens against them.  Or so it seems.

And you can console yourself with the fact that, even though the Stars came back, they deserved what they got: 0 points.

The problem?  No Adam Burish (who will be out tomorrow as well. /sadface).  The man just creates energy, and when he’s not playing, it shows.

Since there weren’t any high points to the game (except Loui’s pretty goal), have some reaction gifs…

Next up: tomorrow against San Jose.  Let’s…let’s make that one a little prettier, shall we?

Let’s talk about Jamie Benn.  The boy is a monster. He ate my heart, he a-ate my heart.

I don’t feel like I’m good enough to even speak the Bennster’s name.  He’s such a BAMF.

First he scored the bad-ass winner at Phoenix:

He just scored that thing with only five seconds left LIKE IT WAS NO BIG DEAL. He’s like,  “I’m Jamie Benn.  I fuck shit up.  It’s what I do.”

Then there was this beauty:

He scored shorthanded the other night at San Jose, but Youtube is dumb and doesn’t have video of it.  Boo.

But take comfort in his wonderful shorite from last night:

Jamie Benn…How do I even begin to explain him? Jamie Benn is flawless. I hear his hair is insured for $10,000 and that he does car commercials in Canada. His favorite movie is Varsity Blues. One time he met John Stamos on a plane…and he told him he was pretty.

Close, but no cigar

The first period, I thought, was horrendous.  The Stars were very fortunate that they weren’t down by more than 1-0.  I’ll admit that I went to bed after the first period, because I was tired and put down by their mediocre play.

By the sounds of it, though, they had a nice second period.  But nonetheless, the game was tied by the end of regulation.  In overtime, Lubomir Visnovsky (who is really starting to become something of a Star-Killer) completed his hat trick.

Once again, Brad Richards and Nick Grossman were out, and we anxiously await their returns.

Next up: tonight against the Snarks.  Er…the Sharks.

In which Steve Ott shows us the finger…

I love our team.

Posted on March 1, 2011 | Leave a comment
On February 26, 2008, the Stars made the Brad Richards trade, a trade that we have been reaping benefits from ever since.  Three years ago, tonight, B-Rad scored five assists in his debut, becoming the first player ever to do so.

I’d definitely say that we did pretty well on that trade, wouldn’t you?  It’s slightly crazy to know that just three years ago, Brad Richards was worth Jussi Jokinen, Mike Smith, Jeff Halpern, and a fourth round draft pick.  The only player out of that trade to still be going strong is ol’ Juicy (good for him.  He’s my bb).  Smith is actually the only player left on the Lightning, and Jeff Halpern was used to acquire Teddy Purcell.

It’s just so crazy, though, isn’t it?  Since that trade, B-Rad has been nothing but a force for the Stars.  Let’s just look at some highs and lows, shall we?

Obviously, we all know about the magic that went down that night.  The Stars had just made a blockbuster trade, and everyone anticipated what B-Rad could do for a team that was well on its way to the playoffs.  The darling Nik Hagman scored his first hat trick that night, helped completely by B-Rad’s passing.  There are sadly no highlights on YouTube from that glorious night.  But we all remember it, so no big deal.

During that magical playoff run, B-Rad proved himself to be the playoff performer he had been with Tampa Bay to the tune of fifteen points through eighteen games.  He was third in team scoring, only behind Brenden Morrow and Mike Ribeiro, who were a different story that year.  Especially memorable was B-Rad’s performance in Game 2 against San Jose, when he scored four points in one period, tying a record.

Let’s just, you know, forget that season.  It’s not that B-Rad was bad.  Gosh no.  Well…this happened: 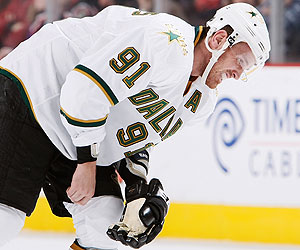 When B-Rad broke his wrist, it pretty much spelled out the end of the Stars’ playoff hopes.  They spiralled into a deep pit of misery, but there was always this light at the end of the tunnel that was B-Rad’s upcoming return.

Then, joyously, the return happened.  I remember that day perfectly.  It was March 21, 2009, and B-Rad was listed as probably for the afternoon game against the Sharks.  I had actually gone shopping that morning and didn’t arrive home until the third period, by which time the Stars were down by two goals.  I started looking around the ice for B-Rad, but he wasn’t there, so I assumed he wasn’t playing.  Then, Ralph said something that made my blood run cold: “Brad Richards hasn’t been on the bench since the start of the period.”

My thought was that he had strained the broken wrist, and I hated myself for wanting him back so soon.  Later that night, Heika broke the news that B-Rad had- ridciculously, unfairly, SOMEHOW- broken his left hand.  That’s right.  After breaking his right wrist, Brad Richards broke his other hand.  It was so ridiculous that I laughed and cried simultaneously.

Last season, though, Brad Richards truly proved his worth to us.  In a season in which he tied a career best in points, B-Rad was a monster all season.  Unfortunately, the Stars didn’t make the playoffs, but B-Rad proved that he is worth every cent of that $7.8 million paycheck.

This season has brought more of the same.   The only difference is Brad Richards’ pending UFA-status that has hung over the Stars like a dark cloud all season long.  Today’s trade deadline brought drama, but no trade.  B-Rad’s lasted this long.  Perhaps we really can keep him…